Stressed Out By COVID and Civil Unrest – the APA’s Stress in America Survey, Part 2 “Now” is the lowest point in history that most Americans can remember: 7 in 10 people in the U.S. feel this way, up from 56% in 2018 and 2019. Furthermore, 4 in 5 people in the U.S. say the future of America is a significant source of stress, as discussed in Stress in the Time of COVID-19, Volume Two, a report covering a poll of U.S. adults sponsored by the American Psychological Association. APA’s Stress in America research has been one of my annual go-to’s for better understanding U.S. residents through the lens of health consumers and, especially this year

Growing Evidence for eConsults – the Asynchronous, Clinician-to-Clinician Platform for Telehealth Health care providers stood up virtual health care services with lightning speed as the coronavirus pandemic emerged in the U.S. Telehealth and its various flavors enabled both patients and providers to manage the risk of contracting the virus, especially at a time when little was known about the nature of transmission, treatment and prevention — except for washing hands, covering one’s face, and isolating when showing symptoms. In Electronic Consultations (eConsults): A Triple Win for Patients, Clinicians, and Payers, the Milbank Memorial Fund explores the evidence supporting the growth of asynchronous electronic consultation encounters between patients and clinicians. Note that

Health Insurance and Demand for Masking, Testing and Contact Tracing – New Data from The Commonwealth Fund The coronavirus pandemic occasioned the Great Lockdown for people to shelter-at-home, tele-work if possible, and shut down large parts of the U.S. economy considered “non-essential.” As health insurance for working-age people is tied to employment, COVID-19 led to disproportionate loss of health plan coverage especially among people earning lower incomes, as well as non-white workers, explained in the Commonwealth Fund Health Care Poll: COVID-19, May-June 2020. The Commonwealth Fund commissioned interviews with 2,271 U.S. adults 18 and over between 13 May and 2nd June 2020 for this study. The survey has two lenses: first, on health insurance coverage among working

What Will Healthcare Costs Be After COVID? PwC Looks Behind the 2021 Numbers 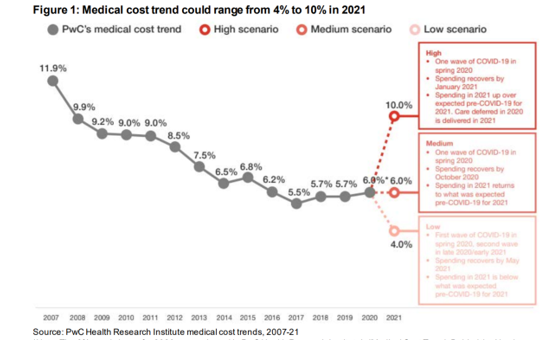 Whether healthcare spending in 2021 increases by double-digits or falls by one-third directly depends on how the coronavirus pandemic will play out over the rest of 2020, based on PwC’s annual report on medical cost trends for 2021. The three cost scenarios are based on assumptions shown in the fine print on the first chart: The medium scenario, a sort of “return to normal” where medical trend could stay even at 6.0%, equal to the 2020 trend. This assumes that healthcare spending recovers by October 2020 as patients return to hospitals and doctors’ offices for regular care patterns. In 2021,

How Can Healthcare Bring Patients Back? A Preview of Our ATA Session, “Onward Together” in the COVID Era Today kicks off the first all-virtual conference of the ATA, the American Telemedicine Association. ATA’s CEO Ann Mond Johnson and team turned on a dime over the past few months, migrating the already-planned live conference scheduled in early May to this week, all online. I’ll be midwifing a panel this afternoon at 440 pm Eastern time, initially focused on how health care can garner patient loyalty. That theme was given to us in the fourth quarter of 2019, when initial planning for ATA 2020 had begun. What a difference a few months make. Not only has ATA pivoted to an

Juneteenth 2020: Inequality and Injustice in Health Care in America Nine in ten Americans is concerned about the price of prescription drugs in the wake of the coronavirus pandemic, Gallup and West Health found in their survey on the cost of healthcare, published today. A majority of people across political party share this concern: overall, 88% of U.S. adults are concerned about rising drug prices in response to COVID19, split across party ID with: 94% of Democrats, 86% of Independents, and 84% of Republicans. By demographics, more women than men are concerned about rising costs for the three health care spending categories the survey studied: drug prices, insurance premiums, and

As Americans Start to Return-to-Work in the Summer of COVID, Mental Health is a Top Concern Among Employers Most U.S. employers worry about workers’ mental health and substance use as employees begin returning to work in the summer of 2020. About 4 in 5 U.S. companies are “very concerned” or “concerned” about employees’ chronic illnesses, acute illnesses, and injuries along with behavioral health issue, based on McKinsey’s annual employer survey which coincided this year with the COVID-19 pandemic. Challenges of opioid use in the workforce remain a concern for two-thirds of U.S. companies, as well. Some 9 in 10 U.S. companies say behavioral health has a negative impact on workforce productivity. In response, 7 in 10 employers are

Some 6 in 10 people in the U.S. have been financially impacted by COVID-19. Those most negatively affected by the pandemic tend to be younger, Gen Z age group and African-American, 63% of whom felt financial pressure directly due from the virus and the national economic lockdown. By late May 2020, 34% of black Americans had lost their jobs compared with 21% in late April, compared with 18% of white consumers, reported in The COVID-19 Pandemic’s Financial Impact on U.S. Consumers, survey research from TransUnion. This post describes data from TransUnion’s Wave 9 report, which polled 2,086 U.S. adults 18

An Airline, A Hospital and A Disinfectant Brand Walk Into A(n Airport) Bar–the New Health/Care Collaboration in the Age of COVID You’ve heard the one about three characters walking into a bar. A new collaboration between United Airlines, Cleveland Clinic and Clorox reminded me of that scenario, and that in the age of the coronavirus pandemic, collaboration can bolster our health. In the era of COVID-19, people — consumers. patients managing chronic conditions, and caregivers (whether for younger or older loved ones) — are concerned about contracting the virus. In U.S. states where governors mandated shelter-at-home for much of the first half of 2020, millions of people have become conditioned to physically distance, wear face coverings, and #StayHome. In particular, workers

In the Pandemic, We’re All About Food The coronavirus pandemic has pushed people down Maslow’s hierarchy of needs toward our basic hunting-and-gathering survival mode: shopping for hygiene products for home and personal care, seeking out masks (both functional and fashionable), and building out our pandemic pantries with shelf-stable foods. In addition to the pure physiological need of food for survival, “Consumers have a greater focus on health and immunity. They also have a desire to exhibit more control,” Charlie Arnot, CEO of The Center for Food Integrity, said on the Professional Dairy Producers’ Dairy Signal webinar on consumer food trends during COVID-19. We’ve become a nation of

How Philips Has Pivoted In the COVID-19 Pandemic: Connected Care From Hospital to Home What a difference 90 days makes. I was scheduled to meet with Roy Jakobs, Chief Business Leader of Connected Care at Philips, at HIMSS in Orlando on 9th March 2020. I’d interviewed Roy at CES 2020 in Las Vegas in January to catch up on consumer health developments, and the March meeting was going to cover Philips’ innovations on the hospital and acute care side of the business, as well as to learn more about Roy’s new role as head of Connected Care. HIMSS cancelled the conference just days before it was to commence….due to the great disruption of COVID-19. “Americans are feeling incredible financial pressure as a result of the COVID outbreak,” John Thompson, Chief Program Officer with the Financial Health Network. One in three people in the U.S. has skipped or stopped paying a bill, and over half of Americans have used emergency savings, according to a survey from the BlackRock Emergency Savings Initiative (ESI). BlackRock, the investment firm, allocated $50 million in February 2019 to form the ESI, focused on helping people with lower incomes to bolster savings and financial health. BlackRock partners in the ESI with the Financial Health Network, CommonWealth, the Center for Advanced Hindsight Common The coronavirus pandemic has further opened the kimono of the U.S. healthcare system to Americans: four months into the COVID-19 outbreak, most consumers (62%) of people in the U.S. are more concerned about other people not having access to high quality health care versus themselves. This is a 16 point increase in concern in May 2020 compared with the response to the same question asked in February in a poll conducted by the University of Chicago Harris School of Public Policy and The Associated Press-NORC Center for Public Affairs Research (the AP-NORC Center). The AP-NORC Poll found more of this The 21st Century Cures Act emphasizes patients’ control of personal health information. ONC rules issues in March 2020 called for more patient-facing health tools and apps to bolster health consumer engagement and empowerment. But the emergence of the coronavirus in the U.S. revealed many weakness in the American health care system, one of which has been health inequities faced by millions of people — especially black Americans, who have sustained higher rates morbidity and mortality for COVID-19. There have also been digital health divides found in the COVID-19 pandemic, discussed in a timely essay in JAMA, Digital Health Equity as 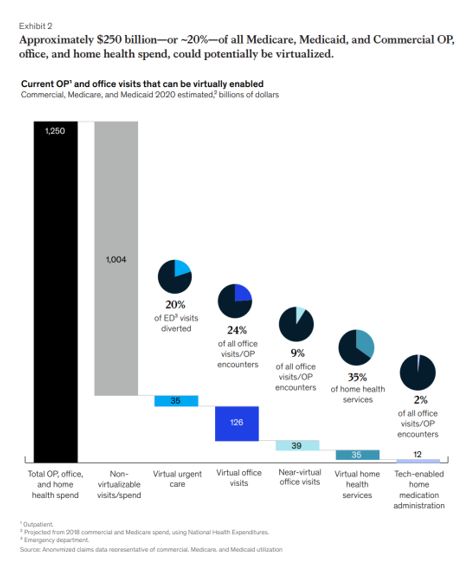 As we wrestle with just “what” health care will look like “after COVID,” there’s one certainty that we can embrace in our health planning and forecasting efforts: that’s the persistence of telehealth and virtual care into health care work- and life-flows, for clinicians and consumers alike and aligned. There’s been a flurry of research into this question since the hockey-stick growth of telemedicine visits were evident in March 2020, just days after the World Health Organization uttered the “P-word:” pandemic. Three recent reports (among many others!) bolster the business and clinical cases for telehealth in America in terms of: A

Cancer in the Age of COVID: Delayed Care May Reverse Survival Gains Particular Among Black People

By Jane Sarasohn-Kahn on 2 June 2020 in Uncategorized There was great news published last week in An Update on Cancer Deaths in the United States from the Centers for Disease Control (CDC): cancer mortality rates have declined by 26% over 20 years, between 1999 to 2018. The drop in deaths from cancer in America was indeed positive during the current public health COVID-19 pandemic, a public health data story easily lost in an overwhelmingly tough week in the U.S.: still embattled with the coronavirus, the nation also continues to shed jobs with the growing threat of an economic recession and financial ill health for mainstream consumers, and the