Connectivity Is A Social Determinant of Health It’s Christmastime, so I’m thinking about connections. “Connectivity” can be social (offline and online), which is indeed a health factor (see Christakis and Fowler on being Connected). But the kind of connectivity to which I’m referring is broadband, WiFi, the kind most often associated with data plans, cable to the home, and free WiFi at your favorite coffee or fast food joint.

That kind of connectivity is also a social determinant of health, and is increasingly becoming so for all people. Yet as peoples’ need for internet connectivity is fast growing, especially for health, home broadband connectivity has reached a plateau in America, according to the Pew Research Center’s report, Home Broadband 2015, published December 21, 2015.

At the same time, use of smartphones for people with no broadband at home increased between 2013 and 2015, from 8% to 13% overall. For African Americans, that increase was 9 points, from 10 to 19%, and for the lowest income cohort, smartphone connectivity hit 21% from 13% in 2013 (with annual household income < $20K). This illustrates that the poorest families are using smartphones for connectivity at a rate one-half greater than the general population (21% versus 13%). 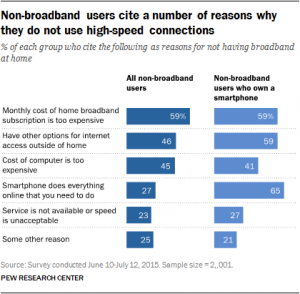 “The fact that more Americans have only a smartphone for online access at home has consequences for how people get information,” researchers at the Pew Research Center write. “Those who are “smartphone-dependent” for access do encounter distinct challenges….they are more likely than other users to run up against data-cap limits that often accompany smartphone service plans. They also more frequently have to cancel or suspend service due to financial constraints,” the report continues.

The second chart shows that cost is the main reason most people do not have broadband connections.

The Pew Research Center team asserts that, “two-thirds (69%) of Americans say that not having a home high-speed internet connection would be a major disadvantage to finding a job, getting health information or accessing other key information – up from 56% who said this in 2010.”

In my paper on digital health for the under-served — aging and frail, people who don’t speak English as a first language, households with lower incomes — I make the case that mobile phone access is becoming a necessary on-ramp for health and health care. The paper will be published by California HealthCare Foundation in January 2016; you’ll know here in Health Populi as soon as it’s up online on the CHCF.org website. Health Populi’s Hot Points:  “Cable Bills Are Rising Again,” a Bloomberg Business story asserts in its title on 23 December 2015. The average price per month rose to nearly $67 in 2014. (I wish that were my bill; mine’s a lot higher).

The article says, “While facing a growing number of consumers who drop pay-TV for cheaper online alternatives, Time Warner Cable Inc., Comcast Corp., Dish Network Corp. and AT&T Inc. are all planning to increase their prices early next year — at the risk of turning off more subscribers fed up with the rising cost of television,” many of whom turn into so-called “cord cutters.”

And those cord-cutters are finding programming elsewhere, on Amazon Prime streaming and Hulu and Netflix. So programmers are spending lots of money on developing shows and passing costs to the cable and satellite companies, who then pass those increased costs onto the remaining consumers subscribing to those services.

What of health, then? You’ll read in my upcoming paper on digital health and the under-served that 8 in 10 lower-income people have smartphones. Great, right! The mobile platform is in the hands of a majority of people who can use it for health and health care. Well, that’s the platform; but what of the connectivity and data plan?

There’s the rub – the cost of data plans force many lower-income people to drop the plans, thereby having the powerful phone but not the on-ramp to health services they may be recommended, or personally want to engage in.

As value-based payment grows for Medicaid, Medicare, VA health services, and commercial payors as well, there’s a rationale to prescribing data plans, and reimbursing them, as part of health services. There are certain regulatory barriers that can prevent this sort of information prescription from being transacted. But it’s a sound prescription in an era where people live online, need and want convenience and time-saving, streamlining in their lives, and are interested in taking more charge of their health. You’ll read more about the opportunities and barriers of this in my CHCF paper on Digitizing the Safety Net.

In the meantime, do remember my new mantra: connectivity is a social determinant of health.

And in this holiday season, I wish you lots of connectedness — online but most especially offline, with family, friends, and your community.