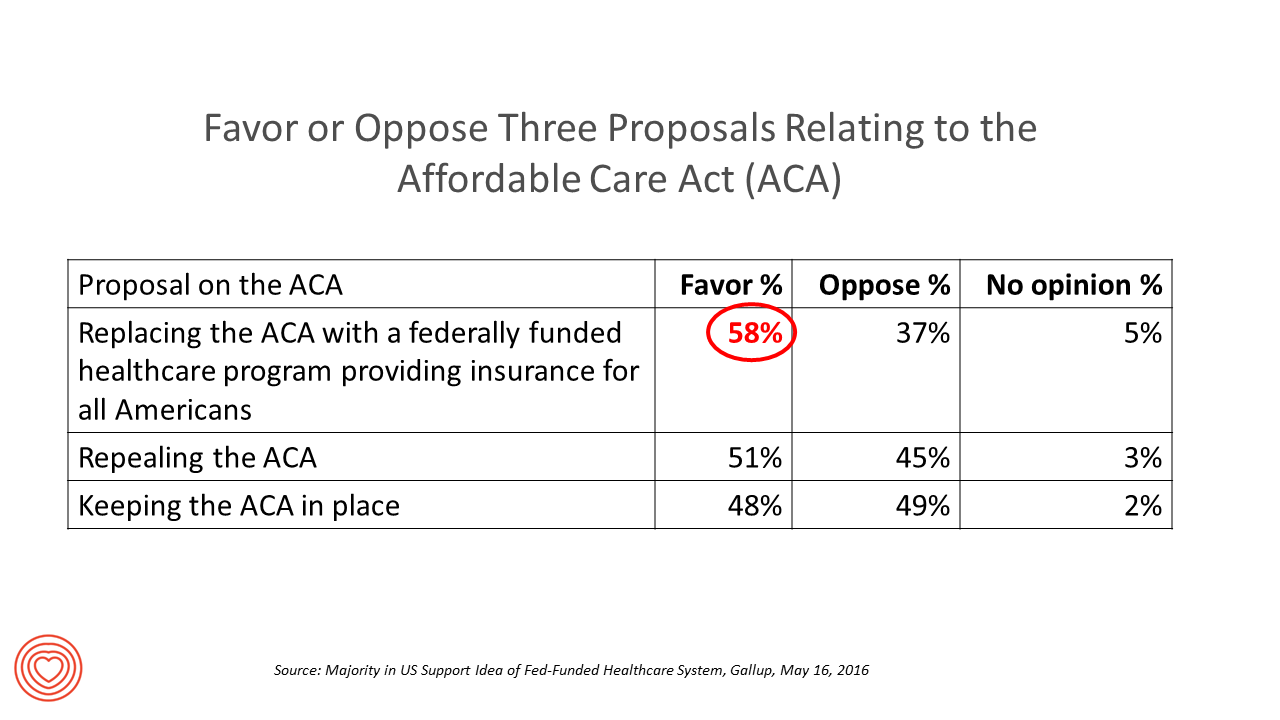 6 in 10 people in the US would like to replace the Affordable Care Act with a national health insurance program for all Americans, according to a Gallup Poll conducted on the phone in May 2016 among 1,549 U.S. adults.

Given a choice, note that 72% of Americans who support the ACA would be in favor of replacing it with a single-payer, national health system.  And surprisingly, 4 in 10 Republicans favor this single-payer healthcare system.

Health Populi’s Hot Points: Shades of Bernie Sanders! The majority preference for a national health insurance system, one funded by Federal money (THINK:: taxpayer dollars), is the kind of new-new datapoint in healthcare surveys we haven’t seen in decades of polling.

The first three years of ACA implementation has not been a logistically smooth or economical experience for many consumers who sought and shopped for health insurance on an exchange. Sticker shock-via-high-deductible has ensued for millions of people, new to the concept and surprised to find their responsibility for covering first-dollar payment until reaching the deductible. You might call this lack of “health plan literacy” – newbies to health insurance signing up for so-called bronze or silver plans were signing on for lower monthly premiums which related to higher annual deductibles. That fine print either eluded many people, or enrollees didn’t anticipate what several thousand dollars might mean to a family budget in real-time, in real-life.

This week, Sarah Kliff wrote in Vox that “3 states are down to one Obamacare insurer,” asking, “What if they fall to zero?” A main lesson from the first three years of the ACA has shown that providing nationwide coverage for any health plan was hard to do, the Office of Personnel Management confessed in a memo dated January 2016. That’s when the rules for multi-state health plans (who theoretically would have provided insurance in all 50 U.S. States), were loosened up allowing plans to cover only selected states.  And thus, the current situation with three states having only one health plan, which means a monopoly situation. As Sarah points out, “in states where it’s the only plan, patients won’t have anywhere else to go.”

In this context, we should remember that health citizens are patients, too, regardless of party affiliation. As for the 4 in 10 Republicans who are keen on the idea of a national health plan? Yes, they, too, are health citizens. And health care costs are the #1 pocketbook issue for all Americans in 2016.