Telehealth and Spirituality – a View From Florence, Italy I’m in Florence, Italy, this week, working on Slow Food as medicine and finding myself contemplating spirituality, health and wellbeing as I walk the streets of this grand city of the Renaissance. Imagine my surprise, yesterday, walking through the city center by the glorious Duomo, the great dome of the cathedral named Santa Maria del Fiore, with the beautiful Baptistry built just across the piazza. You see my initial view approaching the square here, the church and Duomo on the left and the Baptistry on the right. 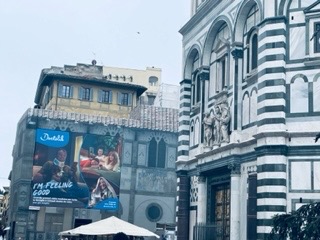 Now cast your eyes in the back right of the photo, to a billboard that, as I approached it, blew my mind.

Upon closer view, I recognized the name on the upper left of this outdoor ad, co-located with one of the world’s greatest religious sites.

This is a billboard promoting Doctolib, the telehealth company whose utilization accelerated during the COVID-19 pandemic experienced in Italy.

“I’m feeling good,” the tagline asserts, with photos featuring a Mom with two kids, a fellow hugging his dog with a neck injury, and an older person probably dealing with a cold or flu standing over a hot pot on the stove in the kitchen.

Each is holding their mobile phone, presumably consulting for their medical issue of the moment.

And this point on your Google Map is one of the most visited among international travelers in the world.

A fascinating reminder that health is where we live, work, play and pray. Health Populi’s Hot Points:  Shifting across the Atlantic Ocean to the U.S., there’s great timing in this new research from my alma mater at the University of Michigan looking into Religious and Spiritual Beliefs and Health Care.

People over 50 years of age in America feel comfortable discussing their religious or spiritual beliefs with health care providers, according to this December 2022 National Poll on Healthy Aging. The Poll is a program conducted by researchers at the University of Michigan Institute for Healthcare Policy and Innovation and sponsored by AARP and Michigan Medicine, U-M’s medical school.

There is a growing evidence base supporting peoples’ spiritual “veracity” and health positivity and engagement that these results build on, finding that:

These values are more likely found among women (63%) than men (46%), and folks living in the South and Midwest more prominently than those living in the West and Northeastern regions of the U.S.

Educational attainment is also an influencer of religious and spiritual believing among older Americans, as well as income: those older people with less education and those earning less than $100,000 annually were more likely to hold to spiritual/religious beliefs.

Belonging to a religious community is a social network: and here’s where the social connectivity can play a role in peoples’ health and wellbeing. Note that among those with spiritual beliefs, 2 in 3 people belonged to a community or organization more commonly among older people with some college education, and reporting better physical and mental health.

An intriguing finding too is that 2 in 5 of the older spiritual adults said health care providers could help them find deeper meaning in their illness experiences — and hope amidst health challenges.

Importantly (and timely in terms of health politics), 77% of older adults preferred that their health care providers kept their own religious or spiritual beliefs separate from their practice of medical care — including 68% of the spiritual/religious group.

My Florence encounter with the Doctolib billboard co-located with the Duomo and glorious Baptistry reminds me and all of us that health is made where we live, work, play, and pray.

As we enter the holiday seasons for people of all faiths, I wish everyone peace, joy, and to be sure, health and love — the most important driver of wellbeing.

And hopes for you to get away from your everyday settings and take a trip, a staycation close to home or further afield. You never know what you are going to find — and if you keep your eyes and heart open, you may well find health along the way.