The State of Mobile Apps in 2016 and Healthcare Implications 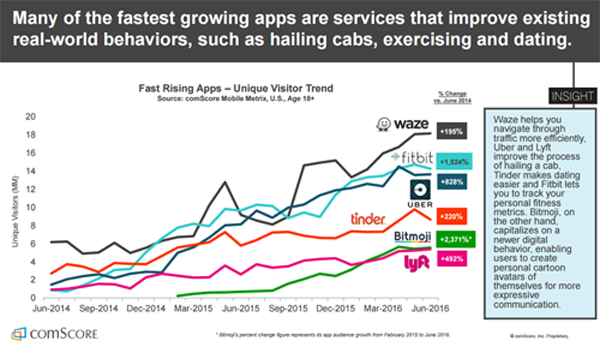 Some of the fastest-growing mobile phone apps help people manage life-tasks every day, like getting real-time directions when driving, finding dates, getting rides, and tracking health, according to The 2016 U.S. Mobile App Report from comScore.

The chart from the comScore Mobile Metrix survey illustrates some popular apps well-used by people on smartphones, with one of the fastest growth rates found for the Fitbit app — 1,524% growth over two years, from June 2014 to June 2016. In comparison, the Uber app visits increased 828% in the period, half as fast, and the Tinder app, 220%.

Some key topline results of this annual report are that:

The report’s data is based on behavioral measurement from comScore’s Media Metrix Multi-Platform, which looks at consumers age 18 and over and unique visits to an app or digital media property at least once over the course of a month.

Health Populi’s Hot Points:  Mobile health is emerging as a complement to primary care at the doctor’s office or clinic. A health consumer can access a visit to a physician using the AmWell (American Well) app, track blood glucose and manage Type 2 diabetes via the MySugr, check lab test results on MyQuest from Quest Diagnostics, and find well-priced prescription drugs on GoodRx.

The evidence base is growing that mobile tools can help people bolster their health. New research from Walgreens published yesterday shows that the company’s Balance Rewards loyalty program has driven greater medication adherence. Specifically, Walgreens researched the relationship between BRhc engagement and adherence to antihypertensive, oral antidiabetic and antihyperlipidemic medications for patients ages 50 and older. The results:

From a user-design standpoint, one intriguing observation comScore uncovered is that 35% of smartphone users age 55 and over only ever operate their smartphone with two hands. This is 6x the rate of people 18-34 who multi-task and use their phones single-handedly (only 6% using two hands to navigate their phones).

To gain adoption and sustained use of a mobile health tool, Job 1 is to be user-centered and Know Thy Patient. If they’re older people, they may fall into the “two-handed smartphone” user, and will have other unique life-flows to consider. One size won’t fit all. But one lesson from Walgreens is that social community and behavioral economics can help nudge people toward sustained use that can make a real difference in peoples’ health and wellbeing.