Most Americans Are Curious and Hopeful About Genetics Research, But Privacy-Concerned 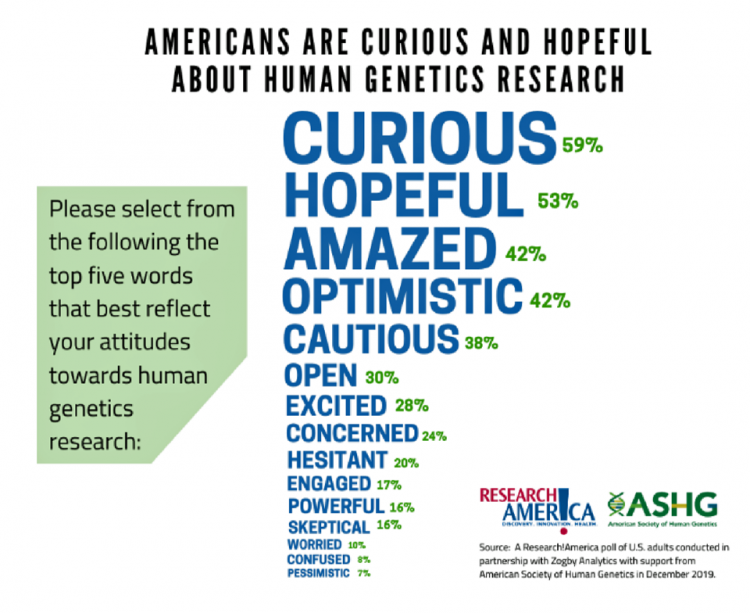 Most Americans associate more optimistic words with human genetics research than they do darker implications: “curious,” “hopeful,” “amazed.” and indeed “optimistic” ranked the top four impressions in peoples’ minds, based on a survey form the American Society of Human Genetics (ASHG).

Below these perceptions are a few concerning concepts such as “cautious,” “concerned,” “hesitant, and “skeptical,” the poll found.

Based on the relatively positive views on genetics research, most Americans support increasing Federal funding for that research: 74% said it was somewhat or very important to do so, compared with 15% saying it was not important. People value genetics research on a personal level: 3 in 4 Americans told the ASHG that genetic research is important to improving family health.

Most consumers also believe it’s a positive that their physicians who treat them will have access to their genetic information, especially to cure cancer, Alzheimer’s. and other disease. There were some ethnic/racial differences underneath this sanguine finding: African-Americans were less likely to be as positive about their prospects of benefiting from this research, although still in majority numbers believing in the benefits for their and their families’ health.

There remains an educational job to be done to debunk some misconceptions among Americans regarding certain aspects about human genetics. For example, three-quarters of consumers said “all serious diseases are genetic” — which is untrue. (In fact, the social determinants of health and environmental and lifestyle factors overwhelm the genes we’re born with when it comes to disease).

Another misconception was that companies and employers “can use my genetic test results to determine my coverage and rates,” something that is illegal to do in the U.S. On the upside, people would be motivated to participate in research based on their view of the potential for their personal information to lead to a cure or treatment for their family, themselves, or for others.

Health Populi’s Hot Points:  The ASHG poll finds that U.S. consumers in aggregate shared hopeful perspectives for genetic research. However, a recent survey from Pew Research Group mined peoples’ opinions about “science,” and the findings are relevant to weave into the ASHG study.

Check out a couple of the more social indicators: more Republicans find scientists seem to feel superior to others, are socially awkward, and don’t pay attention to moral values.

Some other general findings also challenge science’s ability to communicate and engage with consumers:

Who are these “practitioners?” They’re doctors, dietitians, environmental scientists and health specialists…people who apply the science to their work. Generally, those who “do” science are more trusted than those who “make” science.

Thus, as ASHG points to the importance of genetic science literacy and educating the public, we must look at this through the lens of publics, plurally.

Different people — especially based on ethnicity and history (think: Tuskegee and Henrietta Lacks), politics and general literacy in science — need different communication strategies to help them digest just what genetics, genomics and other “omics” mean to them, to their families and communities. As personalized medicine gets ever more personal, this will be so important to engage people in their health in the 2020s and beyond. Using doctors, nurses, nutritionists, and other health practitioners in that education will be one tactic that can help bolster genetics literacy. These are our most-trusted professions in terms of honesty and ethics….so they can be valuable communications channels for genetics-baked healthcare developments.