Vaccine Hesitancy Is Greatest Among Those at Highest Risk of Dying from COVID-19: Black People 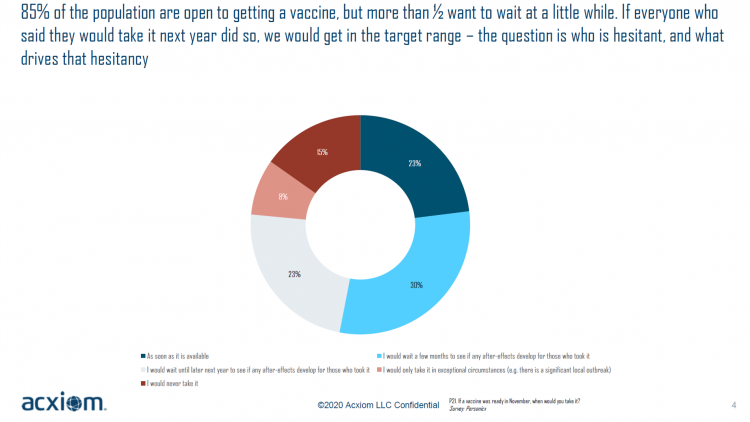 While 85% of people are open to receiving a COVID-19 vaccine, over one-half of them would want to wait some time to observe if after-effects developed in people who took the jab, according to a new study from Acxiom, the data analytics-marketing company. Not all people are as enthused about getting a coronavirus vaccine at all, Acxiom discovered: in fact, those hardest hit by the virus — Black people — would be the least-likely to want to get a COVID-19 vaccine, discussed in in Vaccine Hesitancy in the U.S., a survey the company conducted among 10,000 people in the U.S. and 5,000 people in the U.K. in October and November 2020.

In fact, vaccine hesitancy among the Black population is nearly twice that for White people: 26% of Blacks said they were “against vaccination in general” compared with 15% of Whites, Acxiom found. While the coronavirus has more adversely impacted Black health citizens more acutely than Whites in terms of mortality due to complications of the virus, the pandemic economy has also exacerbated the financial gaps felt by Black Americans before COVID-19 emerged in the U.S.

The second chart organizes data from the Acxiom study concerning the economic effects of the pandemic. Among these impacts, over one-half of Black people have had to cut back on everyday expenses and put off making a big purchase.

In addition, one-in-five Black people have had to skip or defer a monthly payment for housing (mortgage or rent).

It is important to note that, while Hispanic people are not as vaccine-hesitant as Black people, the economic impacts of the COVID-19 pandemic have hit the LatinX community hard in terms of covering everyday expenses, putting off major purchases, spending savings, putting off health care, feeling forced to choose between work and protecting health, and worrying about putting food on the table. Health Populi’s Hot Points:  The most common single reason Americans do not trust the vaccine in the COVID-19 pandemic is due to the rushed timeline, embedded in the phrase, “warp speed,” Acxiom discovered.

That’s common for 42% of people. The second most-common reason for vaccine hesitancy was being against vaccines in general.

Those who would “never” take a coronavirus vaccine were much more likely to be anti-vaxxers. Those people who want to wait and see potential after-effects of the shot were mostly concerned about the “warp speed” rush to deliver a vaccine to market.

Trust underpins both Black peoples’ response to the emerging COVID-19 vaccine, as well as folks who “follow the science” concerns about the shot’s speed-to-market.

“A 70-year old Black man is roughly 50x more likely to die from COVID than a 20-year-old white woman,” Acxiom writes in the takeaways from the study, :But these two people are roughly equally hesitant about taking this vaccine (in part because moments like Tuskegee are still fresh, and there are deep wounds.”

By citing “Tuskegee,” Acxiom’s report writers call out the Tuskegee Airmen syphilis study, which TIME magazine detailed in this historical look back on one of America’s most appalling medical experiments. This event, among others such as Henrietta Lacks

U.S. Surgeon General Jerome Adams led a discussion bringing together former officials of the U.S. Department of Health and Human Services during the National Medical Association’s virtual conference this summer focused on vaccine hesitancy in the Black community potentially worsening the disparate impact of the coronavirus.  The Black community has not forgotten the Tuskegee study, which distrusts the medical establishment. Louis Sullivan, MD, secretary of Health and Human Services under President George H.W. Bush, said at the meeting. Yesterday’s New York Times featured this article on the Ad Council’s new campaign investing $50 million to counter vaccine hesitancy as part of the COVID Collaborative. The Ad Council will be working with working with representatives from across the political aisle along with former FDA Commissioners, CDC Directors, and U.S. Surgeon Generals; former U.S. Secretaries of Education, Homeland Security, and Health and Human Services; leading public health experts and institutions that span the country; the U.S. Chamber of Commerce, and the Business Roundtable; the NAACP, UnidosUS, and the National Congress of American Indians; the Skoll Foundation, The Allstate Foundation, and The Rockefeller Foundation; and associations representing those on the front lines, from the American Public Health Association to the Council of the Great City Schools.

This last photo is of my mom, Polly Greenberg Sarasohn, who led the Salk and Sabin vaccine committee for Oak Park (MI) Schools. The picture includes members of the group representing many types of stakeholders from local business, the school district, the local bank, public health nurses, and others who collaborated to get the good news about #VaccinesWork into the community. This was a new-new thing for the town and took that village of different folks from different communities of business and non-profit worlds to come together to bolster trust.

This is where we are right now, sixty years later. May we build trust between health citizens and science to crush the coronavirus and as we do that, reduce health inequity and disparities.

For further insights and education on the Tuskegee scenario, see this CDC portal with a timeline and background on the situation.